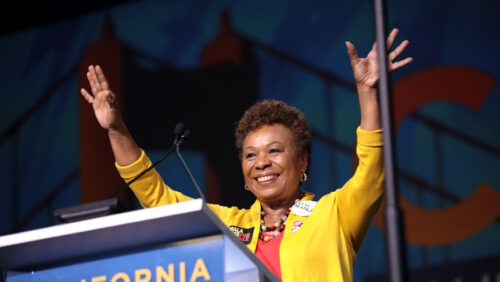 This month, WDN had the honor of hosting a screening of Abby Ginzberg’s documentary Truth to Power: Barbara Lee Speaks for Me, followed by a live panel with Representative Barbara Lee and Abby Ginzberg, moderated by Lateefah Simon, President of the Akonadi Foundation. These three women together spoke powerful truths. What follows are my reflections on the film and how it inspires every single viewer to raise their voice, even when everyone else is silent.

“The lone dissenting vote in all of congress was Barbara Lee.”

September 11, 2001: the US was in a state of deep grief for the 2,977 people killed in the attacks. President George W. Bush and many members of Congress were calling for retaliation through war. On September 14, 2001–just three days after the attack–Congress voted to give the president unilateral power to go to war through the Authorization for Use of Military Force. The House of Representatives approved the resolution 420-1, the Senate approved it 98-0. The lone dissenting vote in all of congress was Barbara Lee.

Not only did Lee vote no, she gave an impassioned speech on the floor of the House, followed by an op-ed in the San Francisco Chronicle, where she wrote that the resolution, “was a blank check to the president to attack anyone involved in the September 11 events–anywhere, in any country, without regard to our nation’s long-term foreign policy, economic and national security interests, and without time limit.” This authorization has since been invoked 41 times. Every year, Lee introduces legislation to get rid of it.

Lee is now lauded for her courageous vote, revered as the lone naysayer to our country’s feral imperialism, the only one who had the guts to follow her feelings to a vote. But at the time, she was vilified and received death threats. In the film, famed author Alice Walker explained why she and others spoke out in support of Lee, “It was courage we had to affirm, so she didn’t feel isolated and alone. We had to show that you can stand your ground, speak your peace, and survive.”

Throughout Lee’s political career she has introduced bold bills, advocating for people in poverty, a bipartisan response to the global AIDS crisis, and equity in cannabis licensing. Lee played a major role in the anti-war movement, notable for her vocal criticism of the Iraq War. She is currently working on major reparations and abortion access legislation.

Let Us All Be Barbara Lees

“We need more of us to be courageous, to be brave, to be willing to be the lone voice on the side of justice.”

I have been thinking lately about how it feels to be the lone voice, the disruptor, to be the one to say or do what you know is right even when it’s not comfortable or you feel scared. To say, “defund the police” in response to state-sanctioned violence; to call for Indigenous land back and reparations in the face of white supremacy and colonization; to question our country’s dependency on fossil fuels in the face of unbridled capitalism; to advocate for open borders in a culture of nationalism; for regenerative economies instead of out of control consumption; and to speak up for things that you know are right when those unexpected, unplanned opportunities arise in our lives.

“We need more Barbaras, Ayannas, and AIs,” She The People’s Aimee Allison says in the film. We do. We need more of us to be courageous, to be brave, to be willing to be the lone voice on the side of justice.

In “Our Greatest Fear,” Marianne Williamson writes, “We are all meant to shine. And as we let our own light shine, we unconsciously give other people permission to do the same. As we are liberated from our own fear, our presence automatically liberates others.”

We must shine and we must support others who are shining: women, Black, Indigenous, people of color, immigrant, disabled, trans, queer, poor, incarcerated and so many more communities and individuals creating something new in the midst of a system that tries to keep us powerless.

Like Congresswoman Barbara Lee, when we speak our truth, in the face of our fears, and step into our power, we allow others to do the same.

Learn more about current legislation Congresswoman Lee is working on.

Learn more about Truth to Power: Barbara Lee Speaks for Me and Abby Ginzberg’s other films.