Building Resilience on the Frontlines of Climate Chaos 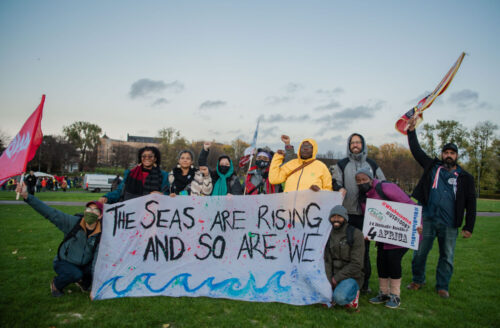 For communities of color throughout the Gulf South, climate change is already here, and it’s only getting worse. The 2021 hurricane season was the third most active in recorded history, and 2020 was the most active ever. The devastation of climate change only amplifies environmental catastrophes, like the BP’s Deepwater Horizon disaster, that have hit the region in recent years.

The Gulf South has some of the deepest pockets of poverty in the U.S, many of the country’s largest Black communities, and, not incidentally, well more than its share of toxic plants and facilities. Environmental racism in the region subjects these communities to tremendous physical risks.

Gulf South communities must develop the resilience and solutions that they need to prepare for worsening climate change as well as other environmental threats. Federal, state, and local governments have ignored their needs for too long. They must rely on each other, demand what they need, and hold local governments and companies accountable. That’s where the Gulf Coast Center for Law & Policy comes in.

The Gulf Coast Center for Law & Policy was founded in the wake of Hurricanes Katrina and Rita, as members of local communities realized that they were on their own in terms of recovering from the disasters and returning home. Created as a program of Moving Forward Gulf Coast, Inc., the organization quickly pushed forward for the rights of local residents living in poverty, recovering more than $1 million in claims around the BP Oil Drilling Disaster.

Since the organization became independent in 2014, the Gulf Coast Center for Law & Policy has been providing free legal services for Gulf Coast residents in the wake of disasters, organizing community members, and helping people understand their human rights and how to protect them. As climate change bears down on the region, the organization has been at the forefront of ensuring that disaster recovery is equitable and rooted in community organizing.

The Gulf Coast Center for Law & Policy has been busy in the past year, working at the local, state, federal, and global levels. From fighting for equity on the Louisiana Governor’s Climate Initiatives Task Force, to co-chairing the nationally-focused Water Equity & Climate Resilience Caucus, to leading the design of the Red, Black & Green New Deal (RBGND) initiative and authoring the first National Black Climate Agenda, the organization is pushing for an aggressive climate response that centers racial justice. At the same time, through efforts like its partnership with the Solutions Project to bring 150 solar generators to Louisiana parishes after Hurricane Ida and the 2021 winter storms, the organization is ensuring that local communities have the tools they need to rebuild and recover in the face of today’s disasters.

WDN funds the Gulf Coast Center for Law & Policy through our Safe and Sustainable Impact Collective, which moves us toward a healthy and sustainable planet for all, where all people and communities are equally protected from harm, including all forms of violence.

When Collette Pichon Battle, Executive Director of Gulf Coast Center for Law & Policy, received notice of her grant, she said, “This grant feels like support and acknowledgment, and I really appreciate them both. I promise to use this to change the world – or at least the South!” We have no doubt that she has already changed the world for the better, and WDN is so proud to help her continue to make the long-term change we all so dearly need.

« A Snapshot of Our Impact in 2021
Mother-Daughter Duo: Linda Mason & Laura Merchant Discuss Their Road to Impact Investing »