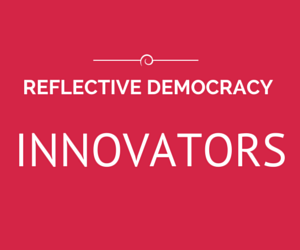 The Women Donors Network (WDN) announced today the Reflective Democracy Innovators program, awarding $425,000 in grants to six projects aimed at dismantling the structural barriers that perpetuate an imbalance between the race and gender of the American people and their elected leaders.

Selected from a pool of more than 120 applicants and chosen by a panel of WDN members and electoral political and democracy experts, the six inaugural Reflective Democracy Innovators are focusing on four priorities the Reflective Democracy campaign has identified as crucial toward building a more representative America: Civic Institutions, Economic Barriers, Political Gatekeepers and Voting Systems.

“We have the power to make a more perfect Union by dismantling the barriers that stand in the way of women and people of color,” said Donna Hall, President & CEO of the Women Donors Network. “From helping to support local civic organizations that serve as the farm team for higher office, to making it easier for middle or low income people to run for office, to shining a light on the gatekeepers who decide who can run, to examining better ways to vote – this is the hard work that can change the face of America and the Women Donors Network is proud to take a leadership role in this work.”

Here are the four awardees that will receive grants this month:

Two additional awardees will receive funding in early 2016: Fair Vote and the research team of Paru Shah (University of Wisconsin- Milwaukee) and Eric Gonzalez Juenke (Michigan State University), will provide an in-depth view into how our voting systems perpetuate the barriers to reflective democracy and insight into structural solutions. These projects will receive their final grants after WDN completes its research that tracks the race and gender of candidates and electeds from the 2012 and 2014 elections.

“WDN’s investment in reflective democracy is nothing short of visionary,” said awardee Gloria Totten of the Public Leadership Institute. “Their support is helping to shape a whole new approach to the way we think about politics, leadership and the future of our democracy.”

Since its launch last October, WDN’s Reflective Democracy Campaign has unveiled groundbreaking research about the race and gender of elected officials nationwide, conducted polling and messaging research to understand how to engage with the public and connected with leading advocacy organizations committed to racial justice, gender equality, civic participation and criminal justice reform. These grants represent an important step in the evolution of the campaign towards identifying and developing concrete, actionable solutions to shift our nation towards reflective democracy.

« Values Based Investing Circle Discusses How to Have an Impact with your Dollars
Art Can Break Through Anesthetization, Says Molly Gochman »