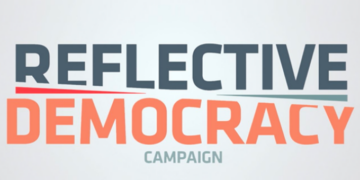 Reflective Democracy in the News

The Reflective Democracy Campaign is back in the news: the Campaign’s research was cited in the New York Times‘ “On Politics” column about the symbolism and real policy advantages to having a woman of color as Vice President. Our grantee And She Could be Next, a two-part documentary series on female history makers filmed by women filmmakers of color, was also mentioned in the article!
Read More »